It’s been a year already … can you believe that? A short update on what the OUAT team has been up to…

When our project was announced as one of the 15 winning projects from @wissimdialog , we immediately started working toward our project goal – working our scientific concepts and theory we work with everyday in to a ‚fairy-tale‘ like story

We started to establish contacts with embassies so in a later stage of the project, we will be able to expand the outreach of our stories. Here is a picture from our visit to the Chilean Embassy in October.

With only good intention its a little hard to make big progress, so to know where to start and how to address our audience-the children, we invited Kevin Kurtz (@kevkurtz5000) to give us a liftoff workshop. Kevin is known as “ an award winning children’s author who writes nonfiction books about science and nature“. He was the Education Officer on the research vessel JOIDES Resolution traveling with an international team of scientists during an expedition in the South Pacific. Kevin shared with us his experience from the ship, and also tips and ideas for our own stories.

The science team in the wissenschaft im:dialog prepared a day full of discussion and brain storming regarding the ways to promote our projects and reaching out for the crowd. and after a short introduction to the other groups, their projects and their so far progress, we dived into the main issue.

After a long winter, our team members have the first stories ready for review!

We had a visit from @wissimdialog 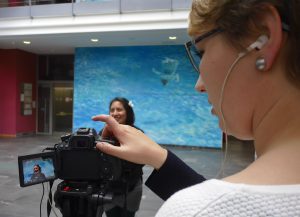 And still there is so much to do! Reviewing the last stories … translating into one of many languages … meeting with illustrators and of course meeting the audience of our stories.

But more about this in future blog posts…..

Until then meet our guy. OUATi the octopus: 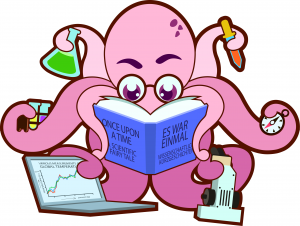