Our stories are finally ready!

Last week we gave you a „sneak peak“ to the story of Gema Martinez Mendez – The Bremen Town Musicians set sail!

So now, just before we publish the stories we need to know: Will you like them? Or will you fall asleep out of boredom…? We put our trust in the beloved characters, the Bremen Town Musicians, to be the first for the test!

And so they set sail…. Really the did! All the way to Spain, to the 4th grade class from the school „CP Escuelas Blancas- San Lázaro (Oviedo, Spain)“ (http://cuartosanlazaro.blogspot.de/)

The children learned about Bremen, how the climate may not always be convenient for you and they laughed out loud about the new the adventures of the Bremen Town Musicians. Read (if you can read Spanish) some of their impressions here. 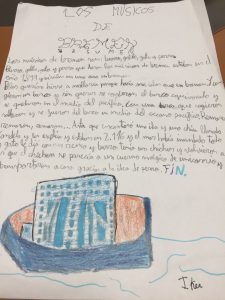 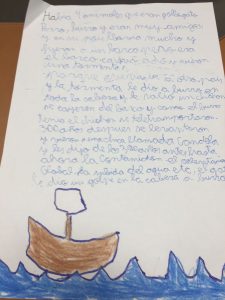 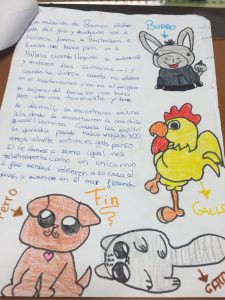 with their permission of course!

Here is a small taste of selected parts from the story:

In an unnamed and vaguely located place somewhere close to Bremen, four old old friends stared at a bundle of luggage. They were old since the meandering path of life they all left behind was long; they were old friends since they had lived many adventures together.

The four lived in harmony in a little house they had won a long time ago from some vile thieves, their, until now, more well-known epic tale. The warmth of the home they created was the fair recompense after a long life of hard work and, sadly, little recognition by those whom they had served.

They had however a high degree of understanding for their old masters. The last years had been even more severe with very cold climatic conditions, colder than the previous ones. The crops had failed again and again. No longer could the masters afford to keep animals, who were getting too old for the heavy and hard-going farm work; they could hardly maintain themselves. None of them knew about it, but they were immersed in the final and very cold stages of the Little Ice Age, a cold period that lasted between the years 1275 and 1850.

‚I cannot take it anymore,‘ Donkey cried, ‚the last few summers have been short and rainy, but this is by far the worst! We have not seen the sun for the whole season. Maybe we cannot even call this “a summer“. Can you believe it, a year without summer? I have been telling you that I am fed up of this cold, which gets into my bones, and I have been seriously considering emigrating for a long time now. I do not want to wait any longer! 1816 is my last year here… I am leaving!‘

They looked at Cat with expectation. He nodded. The four friends left the ship on one of the safety boats, in search of tropical islands. The waves felt much stronger in the small boat, the group were filled with excitement, just like when they first set sail from Amsterdam.

Not long after they set off however, the weather began to change. Sometimes in the tropical latitudes of the Pacific, an atmospheric anomaly meets the warm ocean waters and becomes a tropical storm, or even a hurricane. Little did they know, but our four sailors were about to discover how this felt…